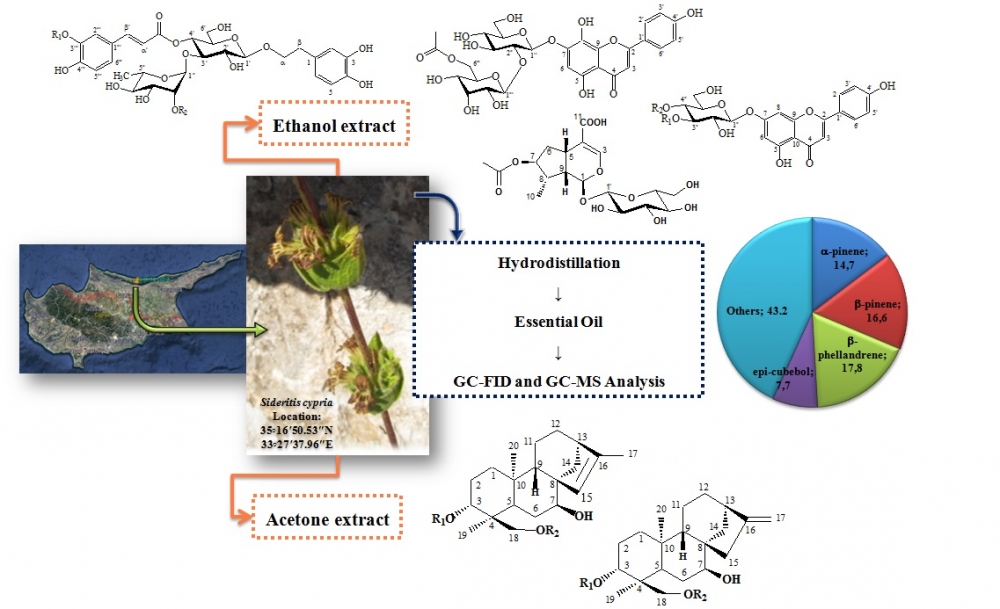 Non-polar and polar compounds were isolated from the leaves and chemical composition of the essential oil from aerial parts of Sideritis cypria endemic in Northern Cyprus was also determined. The structures of all the isolated compounds were elucidated by means of spectroscopic (UV, NMR: 1D and 2D-NMR: 1H, 13C, COSY, HSQC, HMBC) methods and comparison with literature data. The essential oil composition of the plant material was analysed by GC-FID and GC-MS, simultaneously. To the best of our knowledge, secondary metabolites of this endemic species were determined for the first time. As a result, two mixtures of four ent-kaurane diterpenes; sidol (1) and isosidol (2), linearol (3) and isolinearol (4); four phenylethanoid glycosides; verbascoside (5), lavandulifolioside (6), leonoside A (7), leucoseptoside A (8); four flavone glycosides, apigenin-7-O-glucopyranoside (9), isoscutellarein-7-O-[6'''-O-acetyl-allopyranosyl-(1->2)-glucopyranoside] (10) and a mixture of apigenin-7-O-(4''-O-p-coumaroyl)-glucopyranoside (11) and apigenin-7-O-(3''-O-p-coumaroyl)-glucopyranoside (12) were elucidated. 7-O-acetyl-8-epi-loganic acid (13), an iridoid glycoside, was reported herein for the first time for genus Sideritis. In addition, major compounds of the essential oil were determined as a-pinene (14.73±0.15%), b-pinene (16.60±0.20%), b-phellandrene (17.83±0.23%) and epi-cubebol (7.70±0.20%), respectively.